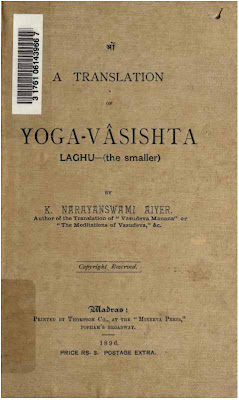 IT is intended to give herein a short introduction to, and an
analysis of, Laghu-Yoga-Vasishta. Of course the analysis can
not be an exhaustive one, as it will have then to run through
many pages and form a book of its own. There are, as
at present known to us, two works by the name of Yoga-
Vasishta, the larger one going by the name of Brihat-Yoga-
Vasishta and the smaller one, Laghu-Yoga-Vasishta. The
term Brihat means great, while Laghu signifies small. Vasishta
is because of this work emanating from Rishi Vasishta as
will be seen later on. Though the book is dubbed with the
appellation, Yoga-Vasishta, it treats ofjnana only though
practical Yoga is dealt with in two stories in this work.
Even there it says that the pure Raja-Yoga is meant and not
Hata-Yoga. Rather the word Yoga seems to have been
used in the title of this work in its generic sense of including
Jnana-Yoga and other Yogas as in the Bagawatgita,