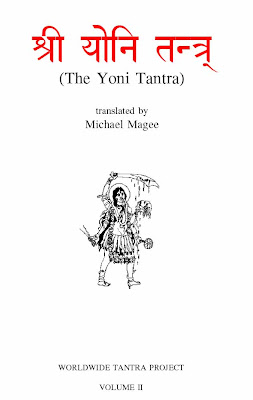 Many Western commentators have alleged that the
‘‘secret sadhana’’ was veiled by a twilight language, but
the Yoni Tantra explodes this myth. Kaulas were the
unlikeliest folk to mince words and the consumption of
the yoni tattva----a mixture of menses and semen----is here
described in the clearest of terms. 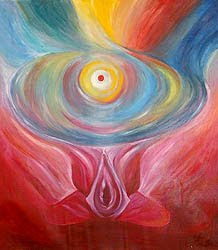 Whilst ritual sexual intercourse is often alluded to in
Kaula and ÉrÌ tantras, there are only a few of these in
which yoni tattva is mentioned. Yoni Tantra could be
described as a eulogy of the yoni and the yoni tattva.

As long ago as 1913, some details relating to this matter
were published in Arthur Avalon’s Hymn to Kali (Luzac,
1913). The matter was obviously held to be highly sensitive
and parts of a commentary relating to consumption of the
yoni tattva are left untranslated.