BEHIND THE SCENES WITH THE MEDIUMS By DAVID P. ABBOTT 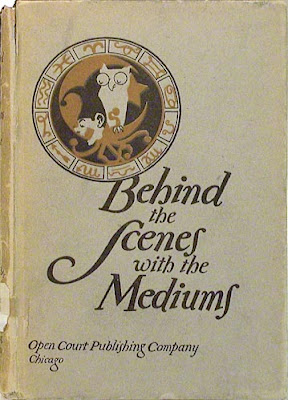 In Behind the Scenes with the Mediums, Abbott described a trumpet séance (during which spirits supposedly spoke through a trumpet) that he had attended eight or ten years before in Lincoln. "The room was bare of furniture, and the guests were seated around the room on chairs holding each other's hands. The medium sat in this circle, and the trumpet stood in the center of the circle.

"As soon as the lights were out the trumpet apparently floated into the air and from its mouth we were greeted by an 'Irish Spirit.' This spirit attempted to be a comedian; but his brogue was unnatural, and his wit was so poor that I felt ashamed for the medium. It, however, seemed to satisfy the majority of the sitters, who appeared to be possessed of only very ordinary mental powers."

Abbott explained, "I was satisfied that the medium held the trumpet to his mouth and did the talking. I knew that by pointing it rapidly in different directions, the voice would appear to come from the various positions occupied by the bell of the trumpet; and the spirit would thus appear to change places rapidly over our heads. I felt certain that the persons sitting on each side of the medium were his confederates, and that they held the hands of the ones next to them; but, of course, released the medium's hands so that he could handle the trumpet. . . .

"To me it seemed merely a very cheap and poor trick. I have never fancied any trick where the lights had to be put out. It requires too little skill to perform such tricks. I have always felt that if the spirits of the departed could return to us mortals, they would not require a tin horn to talk through, and the entire absence of light-waves in the room."