Life Beyond the Veil, vol 4 By Rev. G.Vale Owen 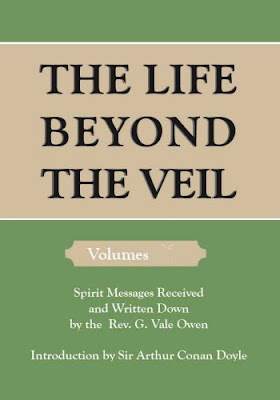 THE messages recorded in this volume were all received and written
down by the Rev. G. Vale Owen in the Vestry of All Hallows', Orford,
Lancashire, after evensong.
The first messages of this series commenced on September 23,
1913, and were from the vicar's mother and "Astriel"; they were
followed by others at intervals, the communicators being
"Zabdiel" and "Leader" and his band. These communications
are contained in the first three volumes of this series, and
in which  given full details of how Mr. Vale Owen
received the messages, together with data concerning the
communicators, their methods, and matters relating to the
personality of the one who received and recorded them.
This present volume contains the communications from
one who gave the name of "Arnel," for such was the name,
disclosed to Mr. Vale Owen in the message.