"THE MAEKANDEYA PURANA" : TRANSLATED WITH NOTES By EDEN PARGITER, 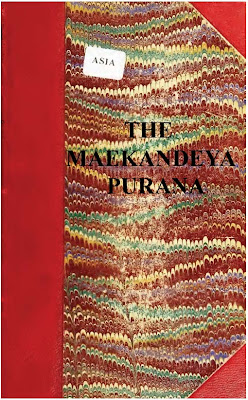 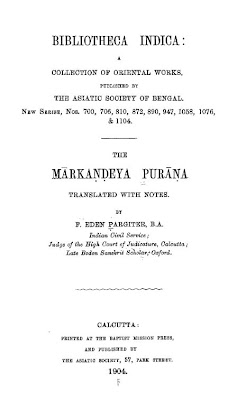 The general character of this Purana has been well summed
up by Prof. Wilson in his preface to his Translation of the
Visnu Purana, except that his description hardly applies to
the Devi-mahatmya.
"This Purana has a character different from that of all the others.
It has nothing of a sectarial spirit, little of a religious tone ; rarely
inserting prayers and invocations to any deity ; and such as are
inserted are brief and moderate. It deals little in precepts,
ceremonial or moral. Its leading feature is narrative ; and it
presents an uninterrupted succession of legends, most of
which when ancient are embellished with new circumstances,
and when new partake so far of the spirit of the old, that
they are disinterested creations of the imagination, having
no particular motive, being designed to recommend
no special doctrine or observance. Whether they are
derived from any other source, or whether they are original
inventions, it is not possible to ascertain. They are most
probably, for the greater part at least, original ; and the whole
has been narrated in the compiler's own manner; a manner
superior to that of the PurSnas in general, with exception of
the Bhagavata."