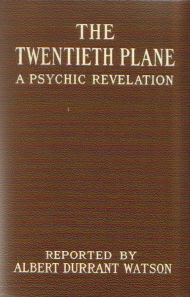 In the early part of the last century, when this book was written, Spiritualism was much more popular and generally taken more seriously than it is today. It is tempting to suggest that works such as this, by stretching the reader's credulity to the limit, may in part be responsible for its decline.

Watson, a Fellow of the Royal Astronomical Society of Canada, and a poet who wrote the words to Canada's national hymn, claims his book is an accurate record of visitations from beyond the grave through the mediumship of one Louis Benjamin, whom Watson grandiosely calls “The Instrument”.

Benjamin, described as “a commercial man, thirty-six years of age”, was evidently a distinctly superior Instrument, one very well-connected in afterlife society, as Watson describes how a succession of great names lined up to speak through him - amongst them Samuel Taylor Coleridge, Tennyson, Shelley, Wordsworth, Shakespeare, Plato, and, slightly incongruously, Watson's late mother. The glorious dead were, we are asked to believe, queueing up to manifest themselves at No. 10 Euclid Avenue, Toronto, in order to deliver mimsy homilies about the loveliness of the next world, such as this one from Louis Agassiz:
If your scene was lit by an eternal sky of pink amid which was a clustering of gold and green, if your air was the distilled essence of astral flower perfume, and if your eyes saw more than is in all the physical universe, then you would be only on the fringe of the love-lap of nature in which we bask...