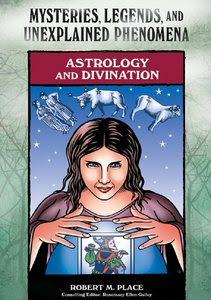 Can we see into the future to tell if we are going to be happy or rich? What does fate have in store for us? These are the kinds of questions that come up when most people think of divination, making it seem like mere fortune-telling or, worse, just plain superstition. Rather than predicting the future, however, divination provides insight and guidance to help a person create the future. It is a way of contacting part of the human mind that resides in the unconscious, providing greater perspective and access to psychic abilities. "Astrology and Divination" is an overview of the history and forms of divination that have existed in human culture around the world since prehistoric times. Delving into the reasoning and psychology of divination, it looks at divination methods including Tarot, astrology, palmistry, and other body readings, the I Ching, and other oracular methods.Chapters include: Confronting the Divine, Omens, Astrology, Divination Games and The Tarot.