Book Of Wamphyri And Shadows By Michael Ford 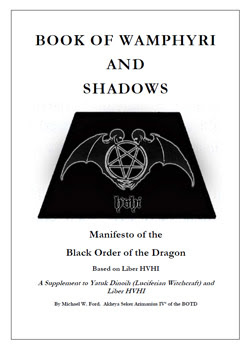 Vampirism is Predatory Spiritualism, self-isolation and deification through antinomian focus. Vampirism is a nameless faith, found in the forge of the first murderer, whose thirst for life was greater than God itself. The Vampire as myth is a symbol of our dark desires, our wish to devour and compel to our Will alone. Vampirism is absorbing the spiritual and mental energy of humanity, that which we wish to leave behind. Vampirism is essentially Luciferianism, those who are Sethian (Of the Adversary the Egyptian Set) Ahrimanist or Satanist. It is not a fringe belief, but a distinct mental reality. It is a way of thinking, being and motivating towards goals. It is also a personal religious focus on the path of Ahriman, the Black Dragon. Akhtya Seker Arimanius, Magister of The Black Order of the Dragon.