"Death and the Afterlife: A Cultural Encyclopedia" By Richard P. Taylor 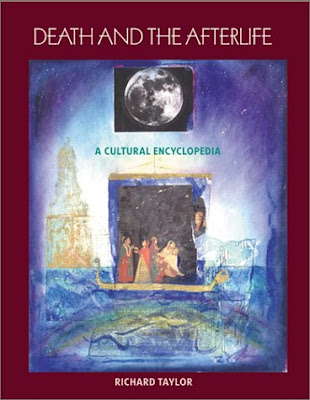 Death and the Afterlife is a comprehensive encyclopedia that aims not just to present information but to "draw out the underlying meaning of funeral and afterlife traditions." Taylor is an instructor at the University of California-Berkeley who offers classes on burial practices and the afterlife and is considered an expert in religious studies.

The entries are succinct, tightly written, and arranged in alphabetical order, ranging in length from a single paragraph to three or four pages. Lengthier treatments include discussions of the funerary customs of Muslims, Jews, Hindus, and Zoroastrians; the origins of the concepts of heaven and hell among Christians and Buddhists; and a consideration of the soul from Chinese, Greek, and Persian perspectives. Briefer entries offer information on burial baskets, canopic jars, and near-death experiences; list the elements of a typical Christian committal service; and describe the antics of a poltergeist. Sidebars contain excerpts from sources such as Beowulf, the Bhagavad-Gita , and the Book of the Dead . Much of the sidebar content is taken from texts cited in the lists of references that conclude each entry and demonstrate Taylor's intention to draw from local and native sources as well as academic studies.

See also references allow for smooth navigation, as do the table of contents and the index. A bibliography of books and scholarly journal articles appears at the conclusion of the encyclopedia. Black-and-white illustrations are found throughout, some being full page and portraying the Tibetan wheel of transmigration, the Last Judgment, and the Taj Mahal, to name a few examples.

The encyclopedia attempts to educate and even, at times, entertain readers by exposing them to the varieties of afterlife traditions. This is not a morbid study but one that yields life-giving energy. The only comparable title to this excellent work is the classic but now dated Funeral Customs the World Over, by Robert Wesley Habenstein and William M. Lamers (Bulfin Printers, 1960). Recommended for public and academic libraries

Email ThisBlogThis!Share to TwitterShare to FacebookShare to Pinterest
Labels: After Life -Near to Death - Spiritual Communication, Encyclopedia