THE ORDER OF PHOSPHORUS 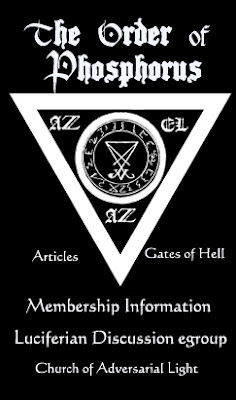 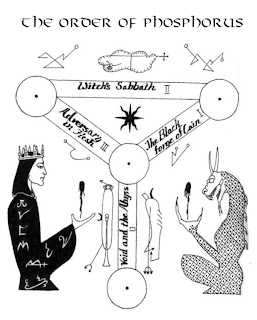 Magick is elevation – to ascend.  The entire focus of Magick is to initiate, strengthen and develop the self.  Work (capitalized) is defined as practice which advances and develops the  consciousness, the continual process of self-initiation. The Witches  Sabbat is one of individualized practice, that any element of practice  must be a focus of sharpening and bringing forth consciousness. Any  practice which is irrelevant to magickal advancement – i.e. self-initiation  – should not be regarded as Magick. This is the very essence of Magick –  regardless of any other title – Black Magick, Dark Witchcraft, Sorcery,  etc.
Luciferianism is a philosophy centered on individuality and self-enlightenment. Often Luciferianism is misrepresented as being associated with devil-worship which could not be further from the truth. Lucifer is a symbol of enlightenment to Luciferians and not a literal being. While some believe in the existence of a literal "Adversary", a cosmic motivator who inspires evolution and chaotic growth, many Luciferians view the Adversary as a symbol or subconscious force of self-enlightenment and motivation. Not a devil who wishes to damn humanity or work against evolution of humanity.