The Original PREDICTING WEATHER BY THE MOON by Ken Ring 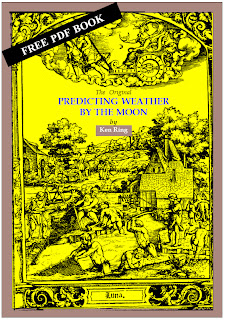 There are three theories about how the Moon came to  be in place: that the Moon came from the Earth, that the  Moon was captured by the Earth and that the Earth and Moon  were formed together. Was the Moon once part of a larger  planet earth, getting ripped away, possibly forming the Pacific  Ocean, following a massive interplanetary explosion?  Or was she at one time in an orbit around the Sun, somewhere  between Mars and Earth and some 2,500 million  years ago came just that bit too close; to be embraced in a  permanent hug around the Earth; an event that caused a sudden  mighty disturbance in Earth’s orbit around the Sun in  which from that moment on, Moon and Earth commenced  a mutual orbit around a common centre of gravity, lying about 2,903 miles from the centre of the Earth? Or did the  Moon form out of initial cloud of gas and dust at the same  time and same place as the parent planet?