The Power of Stars: How Celestial Observations Have Shaped Civilization By Bryan E. Penprase 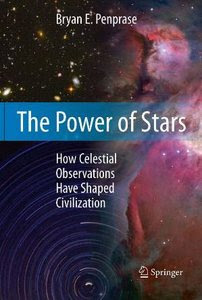 What are some of the connections that bind us to the stars? How have these connections been established? And how have people all around the world and throughout time reacted to the night sky, the sun and moon, in their poetry, mythology, rituals, and temples? This book explores the influence of the sky on both ancient and modern civilization, by pring a clear overview of the many ways in which humans have used the stars as an ordering principle in their cultures, and which today still inspire us intellectually, emotionally, and spiritually. The book explores constellation lore from around the world, celestial alignments of monuments and temples, both from ancient and modern civilizations, and the role the sky has played in the cultures of the Greek, Egyptian, Babylonian, Native American, Chinese, Mayan, Aztec, and Inca. Models of the universe from each of these cultures are described clearly, and each culture’s explanation of the stars, planets, and other celestial objects are described. The roots of astronomy and astrology are presented with original imagery and reproductions of ancient manuscripts that portray the structure of the physical universe as conceived by a diverse array of human cultures over the centuries. Our own scientific Big Bang cosmology and the origin of stars and elements are discussed in a philosophical context, to explore how we as modern people learn about the Universe, and incorporate the findings of science into our world views. A concluding chapter pres a summary of modern science's effort to unlock the celestial secrets from the sky and from past civilizations, and what these answers mean for us today.