"The Power of Tantra" by Hugh B. Urban 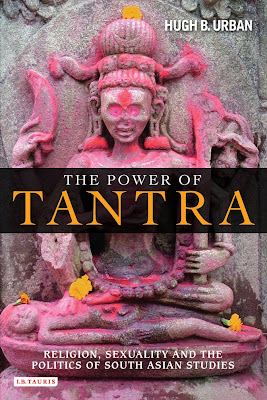 In the West, the varied body of texts and traditions known as Tantra for more than two centuries has had the capacity to scandalise and shock. For European colonisers, Orientalist scholars and Christian missionaries of the Victorian era, Tantra was generally seen as the most degenerate and depraved example of the worst tendencies of the so-called "Indian mind": a pathological mixture of sensuality and religion that prompted the decline of modern Hinduism. Yet for most contemporary New Age and popular writers, Tantra is celebrated as a much-needed affirmation of physical pleasure and sex: indeed as a "cult of ecstasy" to counter the perceived hypocritical prudery of many Westerners. In recent years, Tantra has become the focus of a still larger cultural and political debate. In the eyes of many Hindus, much of the western literature on Tantra represents a form of neo-colonialism, which continues to portray India as an exotic, erotic, hyper-sexualized Orient. Which, then, is the "real" Tantra? Focusing on one of the oldest and most important Tantric traditions, based in Assam, northeast India, Hugh B. Urban shows that Tantra is less about optimal sexual pleasure than about harnessing the divine power of the goddess that flows alike through the cosmos, the human body and political society. In a fresh and vital contribution to the field, the author suggests that the "real" meaning of Tantra lies in helping us rethink not just the history of Indian religions, but also our own modern obsessions with power, sex and the invidious legacies of cultural imperialism.