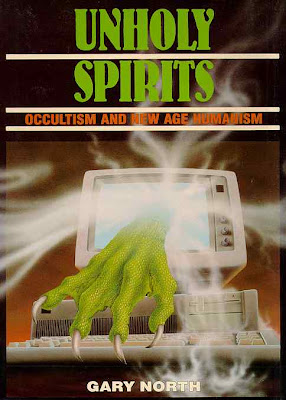 Every Christian ought to read Gary North's "Unholy Spirits." Within our context we probably do not encounter too many psychic healings, spontaneous combustions, witch hexings and the like. North assembles an impressive amount of research (his chapter on the sorcerer's world was particularly intriguing) in a convincing fashion. By the end of the book, one should be convinced in the existence and power of evil spirits. North does an excellent job of critiquing the rationalism of modern scientists, who refuse to take seriously the reality of the paranormal. Rationalism, as Cornelius Van Til argued, has a secret treaty with irrationalism, and North proves the existence of this treaty. Both sides (rationalism/irrationalism), although they often have internal squabbles, are against God and His Anointed. History often manifests the oscillation between these two systems of thought, and this is due to man's propensity to refuse to embrace biblical religion. The 1960s and its infatuation with the occult mark a transitory stage into the irrational, Van Til's "integration into the void." Being a man who refuses to fight something with nothing, North offers his readers the only good alternative to the coming (seemingly) world of irrational, chaotic humanism--covenantal obedience to every word that proceeds out of the mouth of God. "Unholy Spirits" is a fine read. Be sure to follow North's warnings, however, in your study of this often macabre subject.

Email ThisBlogThis!Share to TwitterShare to FacebookShare to Pinterest
Labels: After Life -Near to Death - Spiritual Communication, paranormal phenomena