LIFE IN ANCIENT INDIA IN THE AGE OF THE MANTRAS BY P. T. SRINIVAS IYENGAR 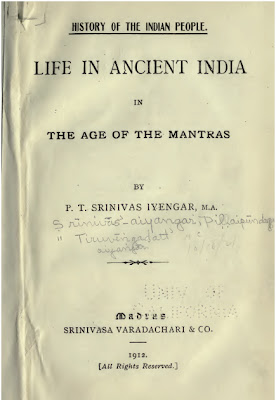 This is the first of a series of monographs on the  History of the Indian people, in which an attempt  will be made to reconstruct the life of the people  of India, age by age from Indian literature,  epigraphical records, and records of foreign travellers.  This is a work that can best be done by Indian  writers trained in methods of critical investigation ;  foreign scholars can scarcely do it well, for they  have not that intimate knowledge of Indian life  as it is to-day, especially in villages which are  remote from the railway and the telegraph and the  influence of European commerce and where are still  preserved most of the customs described in the  following pages ; and without such knowledge, work  of this kind cannot be well done. Nor is it work  to be undertaken by scholars of the type of  the Pandit, who, however estimable his personal  character and ideals in life, sees the past through  the mist of tradition and believes that Ancient  India was in a golden age when the gods roamed  the land and supermen taught the people and who  is so devoid of the historical sense that he holds  everything he has learnt from tradition must be  believed in and that an attempt at verification is  sacrilege.