The Open Secret – by Tony Parson 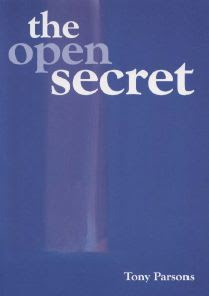 Throughout my early life I felt that there was another possibility which, once realised, would transform all and everything. One day that possibility became a reality, and it was simple and ordinary, magnificent and revolutionary. It is the open secret that reveals itself in every part of our lives. But realisation does not emerge through our attempts to change our lives, it comes as a direct rediscovery of who it is that lives. "The Open Secret" is a singular and radical work which speaks of the fundamental liberation that is absolutely beyond effort, path, process or  belief. ..........Author