Thoughts Are Things by Prentice Mulford 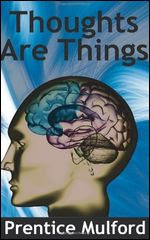 Long before the law of attraction became widely known, Mulford talked about the fact that what we talk about and think about is what we attract to ourselves. He explains that if a group of people talk about disease or suffering, they will eventually bring disease and suffering to themselves in some form. He also notes that the surest way for a woman to become ugly is to be discontented, cross, complaining and envious of others. He therefore encourages the reader to call on the help of the Supreme Power to get into the thought current of things that are healthy, natural, strong and beautiful, and leave the negative thinking behind.

While the book talks about many aspects of the power of thought that will be familiar to today's readers, he also covers some topics you don't hear discussed as much today. One of my favorite chapters is the one on cultivating courage. He notes that courage and presence of mind mean the same thing; and cowardice and lack of mental control mean about the same thing. He notes that courage comes from discipline regarding so-called little or trivial things. It means focusing on whatever you're doing at the moment, rather than allowing your thoughts to scatter in many directions. This focus allows you to have the presence of mind to do what needs to be done, rather than to panic.

A great example of courage he gives is: "It was this electric vigilance and mind watchfulness that gave an American officer during the Revolution, who, in the confusion of battle, suddenly found himself in front of a British regiment, the deliberation to ask, 'What troops are these?' 'The Royal Scots,' was the reply. 'Royal Scots remain as you are,' was his answer, and he rode off to his own lines. That man had a mind trained to give him time to think."