omen's Agency and Rituals in Mixed and Female Masonic Orders (Aries) by Alexandra Heidle and Jan A. M. Snoek 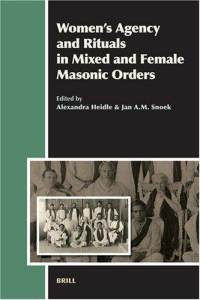 Women have been structurally part of the masonic enterprise from at least the middle of the 18th century. Yet, little is known about the ways in which they themselves obtained and exercised power to influence the systems they were involved in, in order to adapt them to be more appropriate to their needs. This volume intends to concentrate on two aspects: Women's agency (i.e. the power women gained and exercised in this context) and rituals (i.e. the role of men and women in changing and shaping the rituals women work with). These two aspects are closely related, since it requires some agency to realise changes in existing rituals.