Biology of Kundalini Exploring the Fire of Life by Jana Dixon 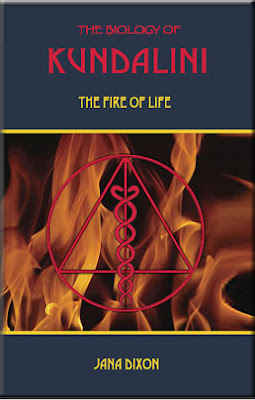 KUNDALINI - (Sanskrit kund, “to burn”; kunda, “to coil or to spiral”) socalled because it is believed to lie like a serpent in the root chakra at the base of the spine. Kundalini is a psycho-spiritual energy, the energy of the consciousness; a concentrated field of intelligent, cosmic, invisible energy, intrinsic and vital to life. Reputedly beginning in the base of the spine when a man or woman begins to evolve as wisdom/Presence is earned through spiritual surrender. Kundalini has been described as liquid fire and liquid light and is an aspect of Shakti, the divine female energy and consort of Shiva. The ultimate outcome of kundalini is the union of Will (shakti-kundalini), Knowledge (prana-kundalini) and Action (para-kundalini). The inner fire is the most potent of all forces, for it knows no limits and penetrates the fabric of space, matter and time.
The aim of this book is to suggest a preliminary protocol to support the fire of kundalini, allowing for permanent gains in transformation. To do this we must prevent ego blowback and prevent neurodegeneration, thereby reducing the biological depression that often happens after an awakening. As the science of kundalini progresses such a protocol for adaptation or higher homeostasis will be greatly refined and expanded. Till then, please be aware dear reader that this is an experimental book. The medical research that will give us the definitive answers to the secrets of metamorphosis has yet to be done. In the past we have had no scientific understanding as to what was actually happening during kundalini and so the alchemy of spirit was shrouded in mystery and superstition. Now in with modern science we can begin to understand what is really going on, and thus build an alchemical science like never before. There is an urgent need to understand the evolutionary process of transmutation, for our human survival might indeed necessitate it.
The Biology of Kundalini will hopefully change the way we look at spiritual evolution, medicine and ourselves. With this book I offer a theory of the biology of kundalini, which explains many of the symptoms, suggests a protocol of adaptation, and encourages research into a new branch of medicine...”Evolutionary Medicine.” It is part self-help book and part notes for students, scientists and medical minds with an interest in the alchemy of consciousness. It also honors the often difficult process of spiritual crisis in a way that hopefully will reduce the suffering for those undergoing the Great Transformation, and for those around them watching the miracle. This information will be invaluable for anyone going through an awakening, for their family and for therapists both medical and psychological............Author

Email ThisBlogThis!Share to TwitterShare to FacebookShare to Pinterest
Labels: Kundalini and Chakras Work