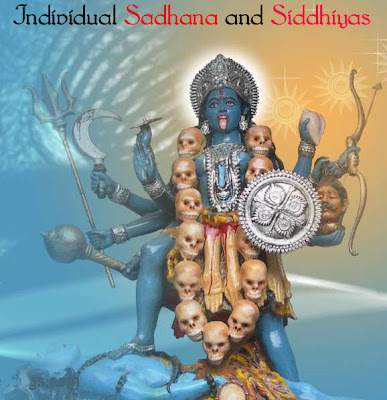 Strictly Warning !!!!!    In this booklet given method  and mantras are very Rare and  Strong , please practice   things under proper guidance .  Also Given things are only for  guidance.

Sadhana:
The word Sadhana generally indicates ‘a means to an end’. In the realm of Indian religious philosophy the word connotes the practice of an essential discipline through which spiritual realization is attained. Sadhana varies to suit different religious practices though the ultimate aim invariably is salvation. Sadhana, in its diversity involves worship, prayer, meditation, and the purification of body, mind and soul. Hindu sadhana is the science of spiritual discipline. As long as discipline of the mind and body is essential for self-realization, the value of sadhana cannot be belittled. Siddhi is the attainment of perfection reached through unrelenting sadhana.
SIDDHI :
SIDDHI (Sanskrit: "accomplishment," "attainment," "perfection"). The term Siddhi is most often applied to a variety of spritual-related psychic capabilities or powers manifested by adherents in the Hindu and Buddhist realms. Through recognizing emptiness, clarity and openness of the mind, different qualities arise naturally, since they are part of mind. The Buddha, whose personal name Siddharta is based in the root-word and means "he whose aim is accomplished," distinguishes between two types:
* Normal Siddhis: all those forces of the conditioned world that transform elements.
* Extraordinary Siddhis: the ability to open beings up for the liberating and enlightening truths; to lead to Realization.
* Siddhi is typically defined as "a magical or spiritual power for the control of self, others and the forces of nature." The Siddhis described by occultists and yogis are in actuality Supernormal Perceptual States available to all human beings. These are absolutely natural abilities that can be explained in highly rational terms. There is nothing mysterious or magical about the Siddhis