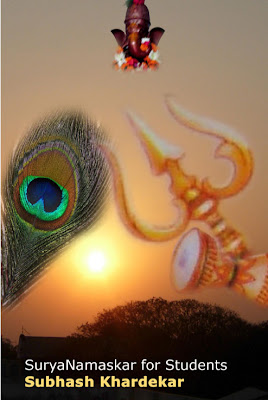 The Surya Panchayatan consists of five deities Â–Lord Vishnu, Lord SuryaNarayan, Lord Shambu Mahadev, AadiShakti (AadiMaya) and Lord Ganesh. The entire mankind is divided according to their faith in GOD - their deity of worship. Those who worship Lord Vishnu are called Vaishnav. Those who worship the Sun God are called Sour. Those who worship Lord Shankar (ShambuMahadev) are called Shaivha.
The peacock feather represents Lord Vishnu who creates, invests and instigates this universe. The Sun God provides the entire universe with everything to sustain life. Damru - one of the percussion instruments - Goes with Lord Shiva who destroys everything in the universe to keep the cycle of birth and death in motion. Trishul is the sign of AadiShakti (AadiMaya). SHE is the prime source of energy behind the creation / birth of all things Â– living and non living. Lord Ganesh is the God of wisdom who grants you intellect to know THIS truth.

Email ThisBlogThis!Share to TwitterShare to FacebookShare to Pinterest
Labels: yoga