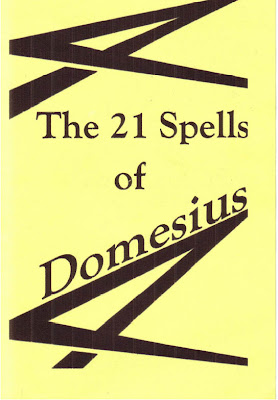 special collection of rare, powerful, High Magic, mystery spells with an inclination toward the dark side!
The 21 magick spells of Domesius are from the original writings of a heretofore little-known practitioner of the magickal arts whose bizarre and shadowy life continued on in a like manner in the life of his writings. The exact time period in which Domesius recorded his findings and wrote the original text upon which these spells are based remains to this day, undetermined and debated. Many members of the more secretive magick circles believe that Domesius wrote his text prior to the writings of Johannes Trithemius (1462-1516) which very well may be so, but there exists little evidence to confirm it. However, while this is decidedly questionable, there has been a general acceptance that Domesius, did in fact, record his works before Giordano Bruno (1548-1600) wrote the famous Cantus Circaeus ("Incantations of Circe") (1582).