The Concept of Bodhicitta in Santideva's Bodhicaryavatara By Francis Brassard 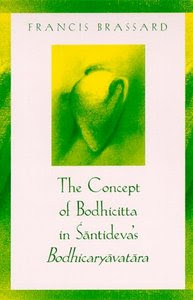 This book explores an important concept within the Buddhist Mahayana tradition, bodhicitta. This term appears frequently in Sanskrit literature relating to the spiritual practices of the bodhisattva in Mahayana Buddhism and has been variously translated as "thought of enlightenment" or "desire of enlightenment." Francis Brassard offers a contextual analysis of bodhicitta based on the presuppositions underlying the spiritual practice of the bodhisattva. Since the understanding that emerges involves how one ought to view the process of spiritual transformation, this work contributes to Buddhist psychology and soteriology in particular, and to comparative religions in general. The book surveys the various interpretations of the concept of bodhicitta, analyzes its possible functions in the context of the spiritual path of the aspirant to enlightenment, and discusses an understanding of bodhicitta in the context of the Santideva's Bodhicaryavatara.

Email ThisBlogThis!Share to TwitterShare to FacebookShare to Pinterest
Labels: Buddhism