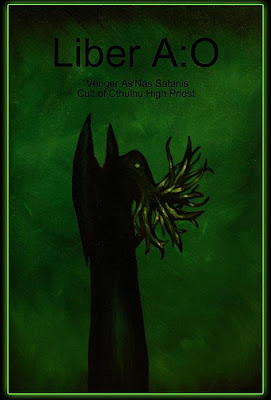 A:O is short for Ancient Ones. For those who aren’t familiar with H.P. Lovecraft and similar authors, the Ancient Ones are atrocious, diabolical, grotesque Gods who came from the universe beyond the universe. Our dimension is just one of many. Untold alienage exists just out of sight, but that doesn’t mean hideous forces aren’t there. A:O also stands for alpha and omega because the Great Old Ones influenced our genetics in the very beginning and They are instrumental to man’s destiny.
Within this brief tome, you will find a spiritual teaching that embraces power, freedom, and carnal indulgence. The Cult of Cthulhu is for all. Put on some dark ambient music and please enjoy Liber A:O.