Necronomicon: The Wanderings of Alhazred (Necronomicon Series) by Donald Tyson 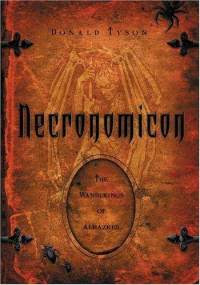 First mentioned by H.P. Lovecraft in the 1920s and referred to throughout his fiction, the Necronomicon—a spurious book of occult knowledge—is so infamous that horror cognoscenti playfully speculate it might exist. Tyson (The Power of the Word) isn't the first writer to attempt a full "translation" of the forbidden text, but his may be the most comprehensive. After a brief history of the book's penning in the eighth century by the mad Arab Abdul Alhazred (eaten by an invisible nasty for his efforts), the text unfolds as a series of interrelated chapters that anatomize Lovecraft's monstrous entities (Cthulhu, Yog-Sothoth, etc.) in archaically musty prose, leavened with paraphrases of familiar passages from HPL's stories. Tyson embellishes this core material with the sort of astrologic and mystical content that Lovecraft himself considered nonsense. Readers who know Lovecraft's book from its evocative fragments won't be dissuaded from their belief that there are some things they are not meant to know.

Email ThisBlogThis!Share to TwitterShare to FacebookShare to Pinterest
Labels: Necronomicon