Encyclopedia of Health and Aging By Kyriakos S. Markides 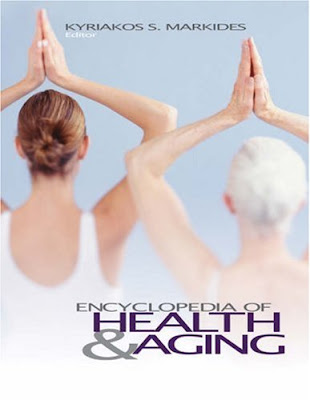 Edited by the founder of the Journal on Aging and Health, this encyclopedia contains more than 200 A–Z entries on a broad range of topics related to health and aging. As outlined in the "Reader's Guide," entries cover "Aging and the Brain," "Diseases and Medical Conditions," " Drug-Related Issues," "Mental Health and Psychology," "Nutritional Issues," and "Systems of Care," to name a few. A number of entries cover health and aging in specific countries or regions, among them Canada, Europe, and Mexico. In the introduction, the editor points out that the encyclopedia is aimed at researchers, students, and practitioners and is unique in its focus on health. In comparison with more thorough and academic texts, such as the Encyclopedia of Aging (Springer, 2006), one will find that Encyclopedia of Health and Aging is written in nontechnical terms and contains more international and cultural entries. Entries vary in length from two paragraphs to a few pages. At the conclusion of each entry is a short listing of "Further Readings and References" that, though briefer than those found in more academic texts, contains up-to-date research findings. The appendix provides a listing of 45 annotated online resources on health and aging, most of which are well-known Web sites and not as exhaustive as the National Institute on Aging database. This encyclopedia is suitable for public libraries that are just starting a collection in the area of aging or organizations that want a concise text written in layman's terms. It is not a necessary purchase for academic libraries that already have core texts, such as the Encyclopedia of Aging.