Hindu Goddesses: Visions of the Divine Feminine in the Hindu Religious Tradition by David R. Kinsley 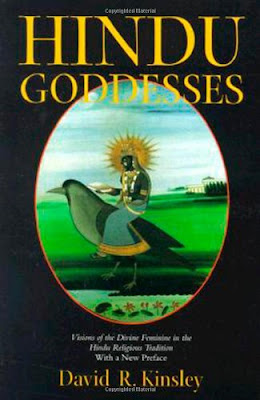 Goddess worship has long been a significant aspect of Hinduism. In this book David Kinsley, author of The Sword and the Flute--Kali & Krsna: Dark Visions of the Terrible and the Sublime in Hindu Mythology, sorts out the rich yet often chaotic history of Hindu goddess worship.
"A compendious survey of major Hindu goddesses . . . The kind of book that one can readily recommend to students for clear, reliable information and reasonable commentary on the goddesses it examines." -- Glenn Yocum, Religious Studies Review
"Kinsley has done a remarkable job in assembling an entire pantheon of Hindu goddesses in one delightful volume . . . . Mandatory reading for all scholars and students interested in South Asian religion, comparative mythology, or models of the feminine in sacred literature." -- Vasudha Narayan, Journal of Asian Studies.