In Search Of Ancient Gods: My Pictorial Evidence For The Impossible by Erich Von Daniken 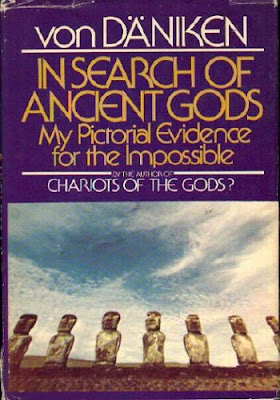 When you look at Erick von Daniken's detractors, they are usually people who have some sort of personal/professional motive for rejecting his theories and it is usually due to archaic religious beliefs, or that other great religion of arrogance and intolerance, modern science. It is easy to find fault with a book as provacative and compelling as this if that is what you set out to do, but no matter what minor faults the debunkers are able to sift out, it doesn't change the fact that Von Daniken's conclusions are very well supported by natural evidence and common sense. I'll trust my own eyes over a scientific theorem any day. I would like to see 100 of his critics be given tools of wood and flint and try to recreate even one of the giant "Heads" on Easter Island. I don't think their fancy math and smug explanations would be of much help to them. Even the world champion of "Hack and Haul" theories, Thor Heyerdahl, admitted it couldn't be done without very modern equipment and know-how.
Von Daniken's merits far outweigh his errors and these "errors" are usually blown way out of proportion by people whose cosmology is most threatened by his theories and his proofs. He is a bold and brilliant man, a small but powerful voice adrift in a sea of willfull ignorance and pseudo-intellectual snobbery.

Email ThisBlogThis!Share to TwitterShare to FacebookShare to Pinterest
Labels: Amazing Philosophy, Self Development and Mind Power