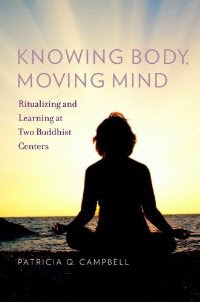 Knowing Body, Moving Mind investigates ritualizing and learning in introductory meditation classes at two Buddhist centers in Toronto, Canada. The centers, Friends of the Heart and Chandrakirti, are led and attended by Western (sometimes called "convert') Buddhists: that is, people from non-Buddhist familial and cultural backgrounds. Inspired by theories that suggest that rituals impart new knowledge or understanding, Patricia Campbell examines how introductory meditation students learn through formal Buddhist practice. Along the way, she also explores practitioners' reasons for enrolling in meditation classes, their interests in Buddhism, and their responses to formal Buddhist practices and to ritual in general.
Based on ethnographic interviews and participant-observation fieldwork, the text follows interview participants' reflections on what they learned in meditation classes and through personal practice, and what roles meditation and other ritual practices played in that learning. Participants' learning experiences are illuminated by an influential learning theory called Bloom's Taxonomy, while the rites and practices taught and performed at the centers are explored using performance theory, a method which focuses on the performative elements of ritual's postures and gestures. But the study expands the performance framework as well, by demonstrating that performative ritualizing includes the concentration techniques that take place in a meditator's mind.
Such techniques are received as traditional mental acts or behaviors that are standardized, repetitively performed, and variously regarded as special, elevated, spiritual or religious. Having established a link between mental and physical forms of ritualizing, the study then demonstrates that the repetitive mental techniques of meditation practice train the mind to develop new skills in the same way that physical postures and gestures train the body. The mind is thus experienced as both embodied and gestural, and the whole of the body as socially and ritually informed.