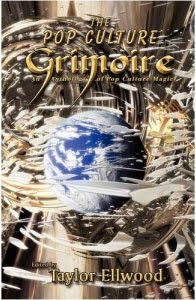 The etymology of the term ‘Grimoire’ is as interesting as its contents. Deriving from the old French term ‘grammiere’, which in turn originates from the Greek word ‘grammatikos’. These terms have later been the influence for more contemporary phrases such as ‘grammar’ and ‘glamour’. So it is no surprise, taking the latter into consideration, that the mysterious text has made its way into pop-culture. Dating back to medieval times, the Grimoire was often a way of concealing Magical text from the eyes of the Christian church, who would have made issue with its very existence. Grimoires were basically what we now know as magical texts; they would contain astrological correspondences, spells, elemental callings, talismans etc etc.

Email ThisBlogThis!Share to TwitterShare to FacebookShare to Pinterest
Labels: Grimoire