Singing the Body of God: The Hymns of Vedantadesika in Their South Indian Tradition by Steven Paul Hopkins 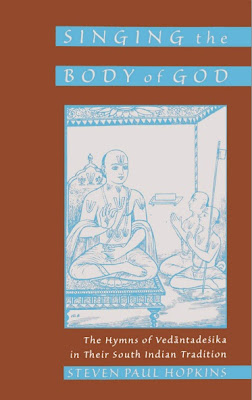 This is the first full-length study of the devotional poetry and poetics of the fourteenth-century poet-philosopher Vedantadesika, one of the most outstanding and influential figures in the Hindu tradition of Sri-Vaishnavism (the cult of Lord Vishnu). Despite their intrinsic beauty and theological importance, the poetry and philosophy of Vedantadesika have received very little scholarly attention. But for the millions who belong to the Vaishnava tradition, those poems are not just classical literature; they are committed to memory, recited, sung, and enacted in ritual both in India and throughout the Hindu diaspora. Steven Hopkins here offers a comparative study of the Sanskrit, Prakit, and Tamil poems composed by Vedantadesika in praise of important Vaishnava shrines and their icons--poems that are considered to be the apogee of South Indian devotional literature.
"An excellent and important addition to the scholarship on South Indian religious literature. Hopkins is eminently succesful in raising broad issues that are of interest to students of poetry, religion, and history at the same time that he renders a particular South Indian intellectual and his world interesting and fully accessibleto the nonspecialist. Hopkins has captured the beauty and emotional power of De'sika's poetry in three languages, making Singing the Body of God yet another link in the chain of "texts of enjoyment." --History of Religions