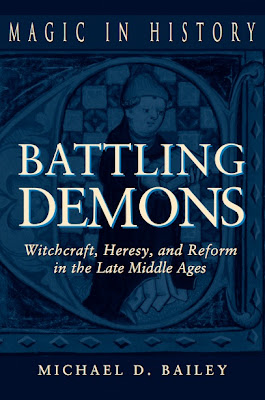 The fifteenth century is more than any other the century of the persecution of witches." So wrote Johan Huizinga more than eighty years ago in his classic Autumn of the Middle Ages. Although Huizinga was correct in his observation, modern readers have tended to focus on the more spectacular witch-hunts of the sixteenth and seventeenth centuries. Nevertheless, it was during the late Middle Ages that the full stereotype of demonic witchcraft developed in Europe, and this is the subject of Battling Demons.
At the heart of the story is Johannes Nider (d. 1438), a Dominican theologian and reformer who alternately persecuted heretics and negotiated with them--a man who was by far the most important church authority to write on witchcraft in the early fifteenth century. Nider was a major source for the infamous Malleus Maleficarum, or Hammer of Witches (1486), the manual of choice for witch-hunters in late medieval Europe. Today Nider's reputation rests squarely on his witchcraft writings, but in his own day he was better known as a leader of the reform movement within the Dominican order and as a writer of important tracts on numerous other aspects of late medieval religiosity, including heresy and lay piety. Battling Demons places Nider in this wider context, showing that for late medieval thinkers, witchcraft was one facet of a much larger crisis plaguing Christian society.
As the only English-language study to focus exclusively on the rise of witchcraft in the early fifteenth century, Battling Demons will be important to students and scholars of the history of magic and witchcraft and medieval religious history.

"In Battling Demons, Michael Bailey places the Dominican theologian Johannes Nider at the center of an emerging set of beliefs about diabolical sorcery and witchcraft in the fifteenth century. His argument is entirely original and will force those of us who study witchcraft to consider its implications not only for the late Middle Ages but also for the great persecutions of the sixteenth and seventeenth centuries." --Edward Peters, University of Pennsylvania