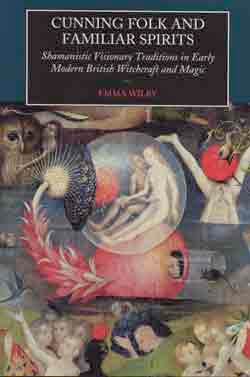 book contains the first comprehensive examination of popular familiar belief in early modern Britain. It provides an in-depth analysis of the correlation between early modern British magic and tribal shamanism, examines the experiential dimension of popular magic and witchcraft in early modern Britain, and explores the links between British fairy beliefs and witch beliefs.
In the hundreds of confessions relating to witchcraft and sorcery trials in early modern Britain there are detailed descriptions of intimate working relationships between popular magical practitioners and familiar spirits of either human or animal form. Until recently historians often dismissed these descriptions as elaborate fictions created by judicial interrogators eager to find evidence of stereotypical pacts with the Devil.
Although this paradigm is now routinely questioned, and most historians acknowledge that there was a folkloric component to familiar lore in the period, these beliefs, and the experiences reportedly associated with them, remain substantially unexplored.
This book examines the folkloric roots of familiar lore from historical, anthropological and comparative religious perspectives. It argues that beliefs about witches' familiars were rooted in beliefs surrounding the use of fairy familiars by beneficent magical practitioners or 'cunning folk', and corroborates this through a comparative analysis of familiar beliefs found in traditional Native American and Siberian shamanism.
The author explores the experiential dimension of familiar lore by drawing parallels between early modern familiar encounters and visionary mysticism as it appears in both tribal shamanism and medieval European contemplative traditions. These perspectives challenge the reductionist view of popular magic in early modern Britain often presented by historians.