Golem: Jewish Magical and Mystical Traditions on the Artificial Anthropoid by Moshe Idel 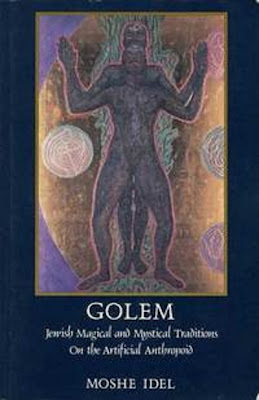 Idel's thesis is that the role of the golem concept in Judaism was to confer an exceptional status to the Jewish elite by bestowing it with the capability of supernatural powers deriving from a profound knowledge of the Hebrew language and its magical and mystical values.
This book is the first comprehensive treatment of the whole range of material dealing with creation of the golem beginning with late antiquity and ending with the modern time. The author explores the relationship between these discussions and their historical and intellectual frameworks. Since there was in the medieval period a variety of traditions concerning the golem, it is plausible to assume that the techniques for creating this creature developed much earlier. This presentation focuses on the precise techniques for creating an artificial human, an issue previously neglected in the literature.
A complete survey of the conceptions of the golem in North European and Spanish literature in medieval time allows not only a better understanding of this phenomenon, but also of the history of Jewish magic and mysticism in the Middle Ages. The Jewish and Christian treatments of the golem in the renaissance are explored as part of the renaissance concern for human nature.