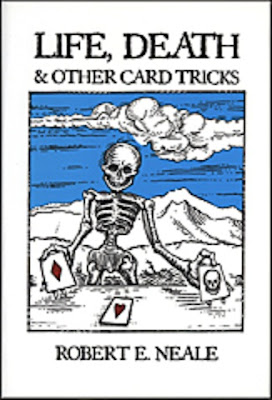 In Robert E. Neale's world, "Twisting the Aces" isn't just a demonstration of cards turning magically face up. It's a humorous contest between Samurai warriors and flies. When cards are eliminated and chosen, the result isn't just a successful prediction. It's a game of life and death. When the cards of a poker hand multiply, vanish and change, they do so not in a magician's hands, but in those of W. C. Fields. When a card vanishes and reappears, it isn't just a display of skill. It's a quick trip between dream and reality. And when a spectator's selection disappears from the deck, he isn't just surprised, he's made immortal. This, then, is the world of Robert E. Neale. It is a different world than you are used to, and it will take you and your audiences to places you've never been before — especially with a deck of cards. Over 60 presentations using normal playing cards.