The Probability of God: A Simple Calculation That Proves the Ultimate Truth by Stephen D. Unwin 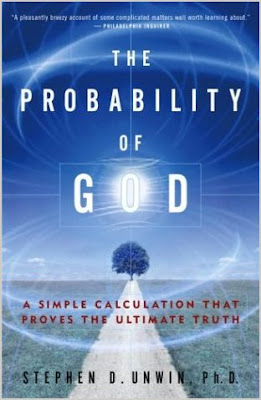 Does God exist?
This is probably the most debated question in the history of mankind. Scholars, scientists, and philosophers have spent their lifetimes trying to prove or disprove the existence of God, only to have their theories crucified by other scholars, scientists, and philosophers. Where the debate breaks down is in the ambiguities and colloquialisms of language. But, by using a universal, unambiguous language—namely, mathematics—can this question finally be answered definitively? That’s what Dr. Stephen Unwin attempts to do in this riveting, accessible, and witty book, The Probability of God.
At its core, this groundbreaking book reveals how a math equation developed more than 200 years ago by noted European philosopher Thomas Bayes can be used to calculate the probability that God exists. The equation itself is much more complicated than a simple coin toss (heads, He’s up there running the show; tails, He’s not). Yet Dr. Unwin writes with a clarity that makes his mathematical proof easy for even the nonmathematician to understand and a verve that makes his book a delight to read. Leading you carefully through each step in his argument, he demonstrates in the end that God does indeed exist.
Whether you’re a devout believer and agree with Dr. Unwin’s proof or are unsure about all things divine, you will find this provocative book enlightening and engaging.