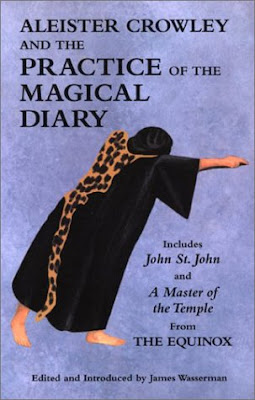 "The Record is both chart and log to the bold Sea-Captains of The Voyage Marvelous." Thus Aleister Crowley describes the practice of the Magical Diary, a central component of his system of spiritual attainment known as Scientific Illuminism .
The collection presented here includes Crowley’s two most important instructional writings on the design and purpose of the Magical Diary. John St. John, first published in THE EQUINOX in 1909, chronicles his moment-to-moment progress during a 13-day Great Magical Retirement. Crowley referred to John St. John as "... a perfect model of what a magical record should be ..."
A Master of the Temple is taken from the Magical Diary of Frater Achad (Charles Stansfeld Jones). It was included in EQUINOX III, 1 in 1919. Crowley edited the diary for publication — and added his invaluable commentary on Achad’s magical work — at a time when he felt Achad was his most successful student.
James Wasserman has been practicing the Magical system of Aleister Crowley for many years. Drawing on other primary Crowley texts, as well as his own experience with the Magical Record, he explores the purpose and necessity of the journal