Encyclopedia of the Vampire: The Living Dead in Myth, Legend, and Popular Culture by S. T. Joshi, John Edgar Browning 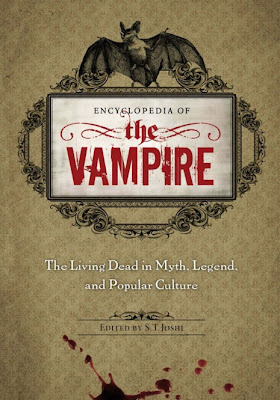 Encyclopedia of the Vampire: The Living Dead in Myth, Legend, and Popular Culture is a comprehensive encyclopedia relating to all phases of vampirism—in literature, film, and television; in folklore; and in world culture. Although previous encyclopedias have attempted to chart this terrain, no prior work contains the depth of information, the breadth of scope, and the up-to-date coverage of this volume.
With contributions from many leading critics of horror and supernatural literature and media, the encyclopedia offers entries on leading authors of vampire literature (Bram Stoker, Anne Rice, Stephenie Meyer), on important individual literary works (Dracula and Interview with the Vampire), on celebrated vampire films (the many different adaptations of Dracula, the Twilight series, Love at First Bite), and on television shows (Buffy the Vampire Slayer and Angel). It also covers other significant topics pertaining to vampires, such as vampires in world folklore, humorous vampire films, and vampire lifestyle.
"This volume is good for information about the living dead in myth, legend, and popular culture from the past through today … High schools and public libraries where patrons are interested in learning more about vampires will benefit from adding this to their holdings …"