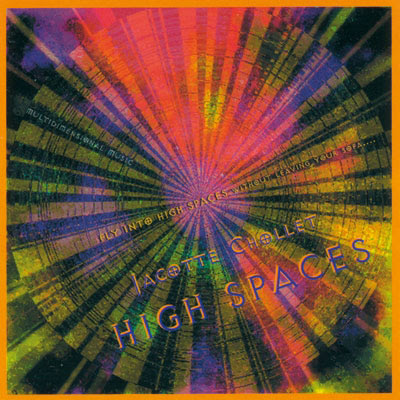 HIGH SPACES is a beautiful & powerful CD to be transported into higher spaces. Its ethereal tonalities provide vibrational flight towards high spheres where we can celebrate our re creation.
GOOD FOR: This CD provokes DNA activation favouring a possible re distribution of information in our DNA, higher consciousness, Higher conscious education and evolution... A powerful vector of multidimensional transformation. consciousness expansion, conscious evolution, DNA reprogramming...
Frequencies : Alpha / Theta / Delta
What is Multidimensional Music?
It's not music in the common sense of the word, it does not follow convention, fad or tradition.
It's a vibration, free and alive which obeys the soul's urge and the body's tempo.
Created out of a "unique inner experience", it is never rearranged, rectified or corrected "afterwards".
It is composed of higher consciousness, coherent energy & sound. It connects with soul, body, mind and spirit...
It contains specific sound frequencies, but it's not only sound, energy and music, it is RESONANCE within.
It's a tool to reconnect with our real SELF, a key to open what was closed. It's a new software, very soft and quite aware, it's a bridge to the source, it's a sonic vector to the multiples dimensions we are made of.
Jacotte Chollet did not learn music academically, she creates her music live from an "expanded state of consciousness." Her music is never corrected afterwards, it springs from intense sessions of creation in a unity of space and time.
Until 1985, she was Associate Producer and Director of over fifty documentary films for the French National Television on the cutting edge of science, psychology and philosophy: Fritjof Capra, David Bohm, Karl Pribram, Paul Mac Lean, Krishnamurti, Kishomaru Ueshiba (creator of Aikkido), Konrad Lorenz, Norman Cousins, Stan Grof, Arthur Janov, and Marilyn Ferguson.
In 1985, following a number of synchronistic events, she had a powerful inner voice experience conveying her the clear message that she had to create music & sound for self healing, she has since dedicated her life to the exploration of the world of vibrations, music and subtle energies.
In 2002, Jacotte completed an 8 CD's collection: "Listening to the Self, Restoring Our Wholeness, resonance” with the whole series provides “harmonic resonance,” reconnection with inner source, release of repressed emotional memories, restructuration of “dissonant” patterns of information, integrating traumatic memories, re harmonizing of the bio energy field, aligning multiple dimensions of the SELF, unfolding subconscious dormant potential, consciously activating DNA.
Her work has been endorsed by eminent specialists such as Stanley Krippner, Kenneth Ring, and Ingo Swann.