Ka: Stories of the Mind and Gods of India by Roberto Calasso 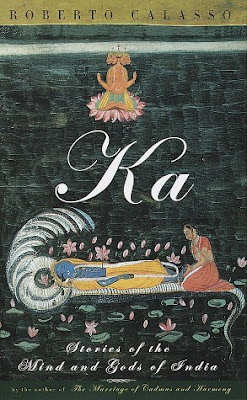 Who is Ka? And who is the immense eagle asking the question, filling the sky, elephant and giant turtle dwarfed in his claws? How can he be the child of a woman? Who are the tiny folk he eats? The first impact of Ka is one of tremendous strangeness, bewilderment, disorientation. How can a Western tradition which demands to identify a beginning and an end understand one that sees no beginning and no end, but only an eternal tangle? Slowly, though, the strange becomes familiar, as new and ever more fantastic stories are spun out, gods emerge, bizarre sacrifices are performed. Why must the king's wife copulate with a dead horse? How is man reduced to an eye in an ant's nest? Why must the road to higher consciousness pass through an erotic adventure? Why is the first girl the dawn and the second the dusk? Rejecting our cravings to have the culture systematized and predigested for us, Calasso invites us to understand India on Indian terms, through Indian images, through India itself.
As Ka unfolds, the worlds of the Devas, of ´Siva, Brahm-a and Visnu, of the wars of the Mah-abh-arata, are splendidly revealed, until finally, with the advent of the Buddha, we are amazed at our own sense of recognition, for these stories seem to confirm, or to articulate for the first time, our own deepest perceptions about our human condition.