Life After Death: A History of the Afterlife in Western Religion by Alan F. Segal 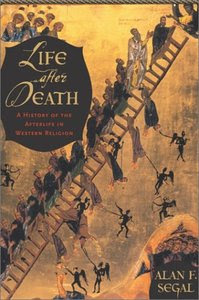 This monumental study combines history, geography, mythology, archaeology and anthropology with biblical text analysis. Segal, a professor of Jewish studies at Barnard College, spent 10 years on this project, but the erudition he displays is undoubtedly the result of a lifetime of scholarship. In every culture, people ask the same fundamental questions about their existence, including "what happens after we die?" Although Segal maintains that answers to that question lie "beyond confirmation or disconfirmation in the scientific sense," he offers a comprehensive overview of how the afterlife is understood in the three main Western religions. He thoroughly examines early influences from Egypt, Mesopotamia, Canaan, Iran and Greece, then analyzes Jewish views as expressed in the first and second temple periods, the book of Daniel, the Dead Sea scrolls and writings from and about New Testament times, the early rabbis, mysticism and fundamentalism. For Christianity, systematic attention is given to Paul, the Gospels, the pseudepigraphic literature and the Church Fathers. Segal also scans Muslim beliefs as they appear in the Qur'an and the writings of Shi'a mystics and modern fundamentalists. The introductory and concluding chapters provide the essence of the presentation, enlivened by quotations from Shakespeare. Impatient readers may begin with these two chapters as a guide to determining which other sections of the book warrant further scrutiny. Careful readers, however, will take the trouble and the time to pore over this impressive contribution to our understanding of human belief and behavior.

Email ThisBlogThis!Share to TwitterShare to FacebookShare to Pinterest
Labels: After Life -Near to Death - Spiritual Communication