Mathematics and the Divine: A Historical Study 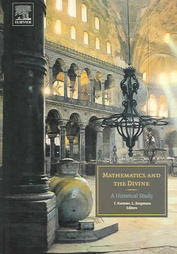 Mathematics and the Divine seem to correspond to diametrically opposed tendencies of the human mind. Does the mathematician not seek what is precisely defined, and do the objects intended by the mystic and the theologian not lie beyond definition? Is mathematics not Man's search for a measure, and isn't the Divine that which is immeasurable ?
The present book shows that the domains of mathematics and the Divine, which may seem so radically separated, have throughout history and across cultures, proved to be intimately related. Religious activities such as the building of temples, the telling of ritual stories or the drawing of enigmatic figures all display distinct mathematical features. Major philosophical systems dealing with the Absolute and theological speculations focussing on our knowledge of the Ultimate have been based on or inspired by mathematics.
A series of chapters by an international team of experts highlighting key figures, schools and trains of thought is presented here. Chinese number mysticism, the views of Pythagoras and Plato and their followers, Nicholas of Cusa's theological geometry, Spinozism and intuitionism as a philosophy of mathematics are treated side by side among many other themes in an attempt at creating a global view on the relation of mathematics and Man's quest for the Absolute in the course of history.