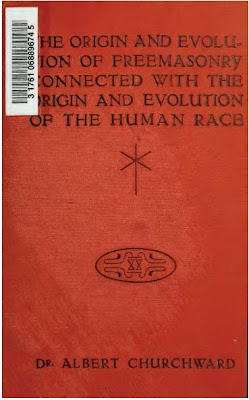 British occultist and Mason, Albert Churchward, seeks to explain in this book first published in 1920 the relationship of the Masonic Lodge to the religions of humanity and the species' larger evolution from the "dawn of time." Churchward was never an admired thinker or writer, but he clearly had a knack for expressing provocative ideas on the origins of Freemasonry, the evolution of humanity, the symbology of ancient Egypt, and a host of other esoterica. All of these concerns are expressed in this stimulating and infuriating work. His history is labored and not a little off-base, his theories are frequently speculative, and his explanations of political positions are often laughable. Nonetheless, this is an interesting and provocative statement of what certain segments of society believed about Freemasonry in the first part of the twentieth century.

Email ThisBlogThis!Share to TwitterShare to FacebookShare to Pinterest
Labels: Freemasonry