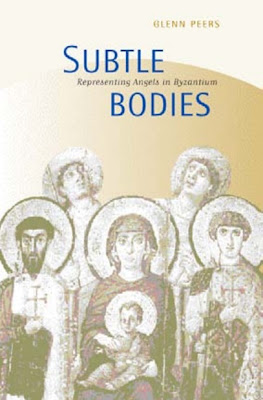 Throughout the course of Byzantine history, Christian doctrine taught that angels have a powerful place in cosmology. It also taught that angels were immaterial, bodiless, invisible beings. But if that were the case, how could they be visualized and depicted in icons and other works of art? This book describes the strategies used by Byzantine artists to represent the incorporeal forms of angels and the rationalizations in defense of their representations mustered by theologians in the face of iconoclastic opposition. Glenn Peers demonstrates that these problems of representation provide a unique window on Late Antique thought in general.
"Peers' insightful and wide-ranging study supplies a clear and comprehensive history of the angelic image in cosmology and cult during the formative period prior to Iconoclasm. The paradoxes of the angelic body provide the proving ground for fiercely contested and incompatible claims for text and image as authoritative representations of the holy."--Jeffrey F. Hamburger, author of Nuns as Artists: The Visual Culture of a Medieval Convent
"[Peers takes] the angelic experience as an instance of the problems inherent in Christian representation. But both astutely and elegantly, he treats angels not simply as an example but as the most enlightening case if we wish to understand these problems."--Anthony Cutler, author of Imagery and Ideology in Byzantine Art