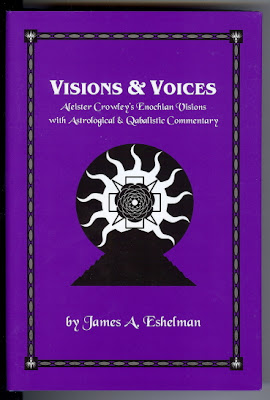 In 1909, Aleister Crowley and his protege Victor Neuburg obtained a series of 33 mystical visions. At once beautiful, horrible, and inspiring, these inner world explorations (and two earlier ones) were published in 1911 as The Vision &; the Voice.
A classic, both of the Enochian magick of Elizabethan wizard John Dee and of Crowley's then-emerging Thelemic magick, The Vision & the Voice remains a living work, its value increasing with each generation.
Astrologers also will find a previously unexploited treasure in this collection: Most of the visions include exact dates, times, and places they were received, providing a unique opportunity to study astrology s relationship to magical vision.
This research bonanza lay untapped for nearly a century.
In Visions & Voices, James Eshelman joins the text of Aleister Crowley s Enochian visions with horoscopes for each. To this he adds a masterful astrological and Qabalistic analysis, expanding and deepening his original landmark study (1997- 2001). It is his most mature work to date, blending rare expertise in many subjects.
Preliminary chapters provide a valuable introduction to Qabalistic and astrological topics including: the Four Worlds, the Tree of Life, Qabalistic psychology, Enochian magick, the Three ?ons, the Holy Guardian Angel and the Abyss, the impact of astrological factors on deep psychological states, and induced mystical vision as a means of exploring the personal and collective unconscious.
The lengthy Glossary will be a standard reference on many an occultist's bookshelf for decades to come.
Visions & Voices will be of considerable interest to astrologers, ceremonial magicians, devotees of mythology and comparative religion, and all who are interested in the operation of symbols (and the archetypes that engender them) in the workings of the human psyche and in crises of transformation.
This book also describes historically rare, extraordinary spiritual states that are becoming increasingly accessible to living women and men. By its words and images, it engenders a contagion of a higher mode of consciousness spread by sympathy. Reading this book mindfully will provide one form of spiritual initiation.
Additionally, it portrays an eclectic spirituality that enthuses our universal need to intimately connect with our own spiritual ideals, rather than dictating what that ideal should be.