Vedanta-Sutras With the Commentary by Sankaracharya 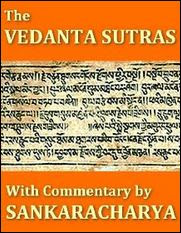 The doctrine advocated by Sankaracharya’s comments is the most important and interesting one which has arisen on Indian soil; neither those forms of the Vedânta which diverge from the view represented by Sañkara nor any of the non-Vedantic systems can be compared with orthodox Vedânta in boldness, depth, and subtlety of speculation. Sankara’s bhaashya (commentaries) is the oldest of the commentaries, it is further the authority most often referred to as to the right understanding of the Vedânta-sutras.