About Satya Jatakam (Basis of Dhruva Nadi) By Sage Satyacharya 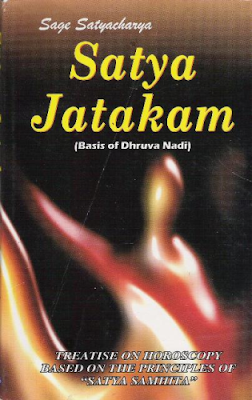 This is an English version of great Astrological work by Satyacharya, considered to embody the principles of Dhruva Nadi and Satya Samhita Nadi. It is told in this work that its princi0ples were communicated by Dhruva to Jaimini, who in turn passed them on to Garga who transmitted them to Vyasa, wherefrom Satya Rishi got them. The name Satyacharya is expressively quoted several times with great reverence by Varahamihira in his Brihat Jataka.
Now coming to the merits of this book, there are many special features in this work that render it unique. Such a treatment of the subject of astrology is novel to this book and is not to be found elsewhere in other texts on the subject. Some of the distinguishing features of this work are the exposition of stellar theory, Panchasiddhanta criterion, Bhavaphala, Grahakarakatva and Dashaphala. The book gives rules to determine the effects of the planets placed in different Nakshatras which are not to be found in general works.