The Chhandogya Upanishad by Swami Krishnananda 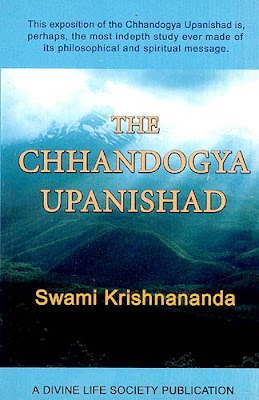 The Chhandogya Upanishad is one of the most prominent among the major group of philosophical and mystical texts constituting one of the threefold foundation of India's spiritual lore, the tripod of Indian Culture, being constituted of the Upanishads, the Brahmasutras and the Bhagavadgita. While the Veda Samhitas are the recognised primary source of divine inspiration, their hidden intention, purported message, is supposed to be prominently revealed in the Upanishads.
The Vedas are said to be capable of a variety of interpretation, - a knowledge of the adhidaiva or the transcendent divinity, adhibhuta or the created universe, adhyatma or the deepest subjective consciousness, adhiyajna or the field of action and sacrifice, and adhidharma or the function of law and order.
Though, in a restricted sense, the adhyatma, in this mentioned classification, may appear as an insight into the perceiving and knowing subject as distinguished from its involvements in the objective universe and the transcendent divinity, thus categorising the Upanishads as records of inward revelations of the ancient sages, yet, the Upanishads constitute Adhyatma-Vidya or knowledge of the pure self in a wider sense, inasmuch as the self can be envisaged in the different degrees of its connotation and the many levels of its expression.
God above, the universe outside, the society of persons and things in the midst of whom one's own individuality may be included, are all, in the final analysis, comprehended within the status of the Absolute Self, so that, in its broad outlook the Upanishads may be considered as a groundwork in whose light may be studied every branch of knowledge and learning.

Email ThisBlogThis!Share to TwitterShare to FacebookShare to Pinterest
Labels: Upanishad