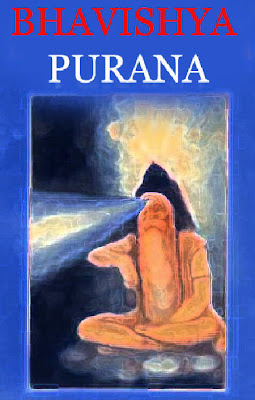 Puranas are almost like an encyclopedia listing the human achievements in this part of the world till the time they were edited or compiled. In every cycle of time the master editor called Vedavyas emerges to edit, vet and compile these records. Their significance is enormous even in the present, as they give a peep into the distant past of Hindus when the world was evolving and the psyche of the race was being formed.
These Puranas record the arguments that make us to decide as to what is holy and what is vile; what is good and what is bad. By going through them we can compare our present day jurisprudence vis-à-vis the ancient norms. Apart from that, they are a huge store-house of information conceiving every subject under the sun. It is with the view of unearthing these gems that the present series of the puranas has been planned.
The Bhavishya Purana, the ninth in the list of the Mahapurana, is a short Purana, containing about fourteen thousand couplets. The Bhavishya Purana earns a special distinction by being the only Purana that is based on the Predictions. It mostly tells us what will be from the time it was compiled in. It is believed that the present edition of the Bhavishya Purana is the abridged or condensed version of the three Puranas known as Bhavishya Purana, Bhavishyati Purana and Bhavishyottara Purana.