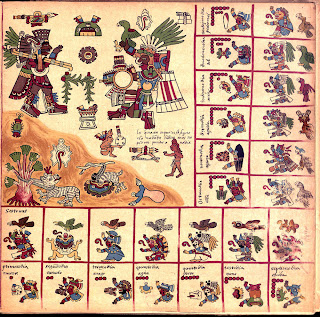 Codex Borbonicus also known as Codex Cihuacoat was written just a few years before the Spanish conquest of the Aztec Empire. Only a few of these codices are known, since the fourth tlatoani Itzcoatl ordered them all burnt because it was “not wise that all the people should know the paintings”. Like all pre-Columbian codices, Codex Borbonicus is entirely pictorial, although some Spanish descriptions were later added.

Codex Borbonicus can be divided into three sections. The first section is one of the most intricate surviving divinatory calendars (or tonalamatl). Each page represents one of the 20 trecena (or 13-day periods), in the tonalpohualli (or 260-day year). The second section of the codex documents the Mesoamerican 52 year cycle, showing in order the dates of the first days of each of these 52 solar years. The third section is about rituals and ceremonies, particularly those that end the 52-year cycle, when the “new fire” must be lit.